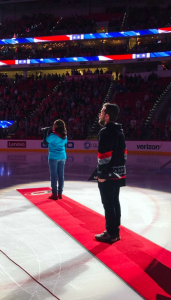 UNCG’s own Kinesiology Undergraduate student, Neil Barrett, was recognized for his service to the United States Air Force Friday February 17, 2017 at the Carolina Hurricane’s Hockey game.

SSgt Barrett served in the USAF from May 2007-May 2014 including a deployment to Afghanistan December 2011-June 2012. Currently a senior, he transferred to UNCG in the Fall of 2014 after getting out of the Air Force. When asked how the event was set up, Neil reported his girlfriend emailed the Hurricanes and set the whole thing up. “I was presented to the crowd during the pregame and stood on the ice during the singing of the national anthem. The Hurricanes flew a flag over the Arena the day of the game and then just before the pregame, they took it down, folded it and placed it in a commemorative display box” as seen in the photo .

When asked if he had any advice for other UNCG students, “The lesson I have learned more than any other during my time at UNCG is, “Fail Harder.” That is the idea that repeating things we are already comfortable doing only makes us better at those things, but true growth comes from failure. You should throw yourself into things without fear of failing. The great thing about UNCG is that it offers you a relatively safe opportunity to get outside of your comfort zone and push yourself to be better, to learn something new, or to see a new perspective. So take Japanese, study abroad, or teach a Zumba class. Do something that you have never done before and dive head first into it; because at the end of the day, whether it went well, or it went poorly, you won’t have failed.”