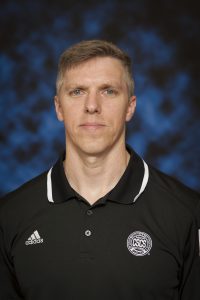 Dave Wiederrecht, current EdD student, grew up in Pennsylvania and attended Messiah College where he ran track and field. “The 400 hurdles was my main event,” recalls Dave.  His coach, Doug Miller, played an essential role in his life, beyond coach he was his professor, and ultimately his academic advisor. Messiah College track and field was a very community-oriented team, so Coach Miller’s family was present many days. Dave even remembers meeting Coach Miller’s family and daughter, Mindy, who would be present at some of the meets.

Dave and Mindy’s paths continued to weave together as he became a high school track and field coach and would often see Mindy at meets where she competed as a high schooler. Dave eventually moved out of Pennsylvania to pursue coaching positions at the collegiate level and after several years decided to go back to school to earn his Educational Doctorate. In Spring of 2018 Dave got word that he was accepted into the EdD in KIN program at UNC Greensboro and in Fall 2018 he began his classes. Dave said, “Once I accepted at UNCG, I met another Messiah Alum in my cohort, and she mentioned to me that Mindy was also in the program.” He soon found out that Mindy was a senior lecturer in applied health science and director of student wellness at Messiah College, where at the very last minute, Dave’s daughter, Kathryn decided to attend college. Funny enough, Kathryn even has Mindy as an instructor now and Kathryn is continuing in the family tradition of running track and field at Messiah. Dave’s older sister ran track at Messiah, and his niece is currently running track at Messiah, too.

While connections happen every day, it’s not something the EdD in KIN program takes for granted. Making connections is one of the reasons this program is so different from other online programs. A current student said it best, “Although my classmates live all across the nation,  we’re closely connected. We support each other in all our endeavors.”

Dave will be presenting at the 95th annual Texas Association for Health, Physical Education, Recreation, & Dance (TAHPERD) Conference later this month. He has two presentations titled, “Implementing the Functional Movement Screen in Physical Education” and “On the Ball Training.” The Functional Movement Screen provides a standard operating procedure to screen movement, create corrective exercises to move well and move often. Dave said, “Think of it as an ‘eye exam’ for your movement. Meaning, one doesn’t have to have ‘perfect’ vision, but to drive a car, one needs a minimum threshold to drive safely!” For more information on the conference or if you would like to attend the sessions look here. Best of luck on your presentation Dave!