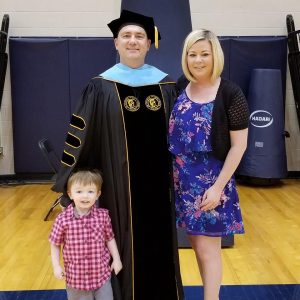 Craig Parkes, a 2018 EdD graduate, recently accepted a tenure-track assistant professor position at the University of South Alabama in the Department of Health, Kinesiology, and Sport, starting January 2019. Previously, Craig worked at Penn State University primarily teaching in the PETE program for six and a half years, while simultaneously completing his EdD here at UNC Greensboro from 2014-2018. Craig’s hard work paid off and he was offered an on campus interview at South Alabama the day before his doctoral defense. Craig recalls being excited at the prospect of being offered a new faculty position so close to graduation. Now, Craig is looking forward to this new opportunity to work with like-minded faculty who have already begun to support him before his contract has even begun.

Craig was appreciative of his time as a EdD student at UNCG and thought that his work here helped him in many ways. He stated, “First, without the doctorate the chance of obtaining a tenure-track professor position is low. Second, studying at UNCG while also teaching at Penn State helped me to become a better faculty member at work and a better student at home. Third, I became a much better researcher through the dissertation process. I worked closely with Dr. Michael Hemphill, who really gave me some great ideas on how to conduct high quality qualitative research. I really feel confident in leading more research projects as I move into this new role, and already have some IRB approval and data collection completed on some upcoming projects, including one with Dr. Hemphill, who has become a close friend post-graduation.”

Craig was in the inaugural cohort of EdD students completing their degree online. He and his family are excited to make the move and fulfill a lifelong dream of residing in a warm climate near the ocean. One of Craig’s hobbies include chilling out at the beach with his wife and son. Looks like he’ll be able to make this happen more often. Congrats on your new position Craig!