Department of Kinesiology > News and Events > EdD > Ted Monnich: Coach, Curator, Consultant and His Pursuit of a Doctorate

Ted Monnich: Coach, Curator, Consultant and His Pursuit of a Doctorate 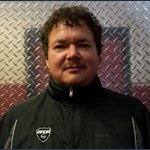 Ted Monnich, is not your typical student. For one, he brings a wealth of experience with him—ranging from art curator, to music lecturer, to being a renowned expert in elite performance, particularly with hockey goalies. He claims to have always been a passionate person, which would explain why, in the first two weeks of school, he went from doing a music lecture in Pittsburg, to presenting on Flow State at Burning Man in Nevada. I was curious why someone regarded as an expert in so many fields would want to return to school?

Ted came into the EdD program as a sport psychology consultant working with ice hockey players, and almost exclusively with goalies. In fact, he was an ice hockey goalie coach for almost 20 years. He himself is a retired professional ice hockey goalie, though he humbly adds that he only played in the minors (the beer leagues is how he humorously refers to it). “ I wanted to transition from coaching to sport psychology. I found the program at UNCG, where I earned a master’s degree in sport and exercise psychology in the kinesiology program.”

The not-so-straightforward path of a Renaissance Man

Prior to coaching hockey, Ted could be considered somewhat of a renaissance man. As he put it, “I live by the words of Joseph Campbell ‘Follow your bliss.’” I am a very passion-driven person, sometimes good, sometimes, well…. “ 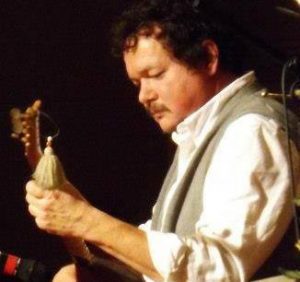 When Ted was very young, he landed an internship with a blacksmith. His early work as an artist/blacksmith sculptor led him to museum conservation work. His work has been exhibited in galleries, universities and museums around the country. “I’m not active with this at this time because Dr. Gill assigns so much reading,” Ted says with a laugh.

For over 35 years, Ted has restored art for several well-known museums including The New York Metropolitan Museum of Art, The South Carolina State Museum, The Biltmore Estate, Brookgreen Gardens, among many others. Although he has transitioned from this work to coaching and sport psychology, he still takes care of the world-class collection of sculptures at Brookgreen Gardens in South Carolina. “I am in my 25th year there, and will probably always maintain an active connection to that institution for sentimental reasons.”

In addition to art conservator, he is also a founding member of the world music group TURKU: Nomads of the Silk Road. The group has released four albums, two concert videos, and has toured the world. Ted had studied the music of Turkey, Iran, and other countries in the region for 20 years and even lived Turkey while coaching hockey. “I now study and teach early music, 13th-14th centuries, of the Timurid, Seljuk, and Ottoman empires. I also harbor a secret life as a DJ at Balkan dance parties.”

Returning to a former passion 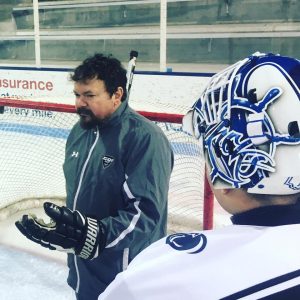 Ice hockey was not a passion developed later in life. In fact, Ted started playing ice hockey at 10 years old in Pittsburgh, PA. He played successfully through high school but states, “After high school, my passion for blacksmithing took over.” It was not until years later that Ted returned to ice hockey recreationally as an adult, and “ that old passion,” he states, “ returned in a big way.”

His motto in the “beer leagues’ was, “I just don’t wanna suck.” He says he “took it to the extreme in studying my position, working with trainers, etcetera, until I caught the eye of the AA minor pro team in Columbia, SC—the Columbia Inferno.” They brought him on as a practice goalie, and eventually as a team member for three seasons. He transitioned to assistant coach and video coach. Coaching led him to Sports Psychology, which led him to pursue a master’s degree at UNCG. At this point he had a private practice in art restoration and played music in TURKU. “Yes, those were all odd bedfellows,” he admits, but onward he continues.

Ted did not stop once he completed his master’s in Sports Psychology he, as is his nature, wanted to take it to the next level and pursue a doctorate. Upon the recommendation of his advisor, Dr. Diane Gill, he applied for the EdD in KIN Online Doctorate Program. He began this past fall and is in the process of figuring out how to balance school with all of his other passions.

“It’s a juggling act,” he states with a matter-of-factness, “this semester started earlier than usual, and caught me in a professional schedule of teaching music at a festival in Pittsburgh, then lecturing and coaching at a camp at Pennsylvania State University, and then traveling to the Burning Man festival to present on my proposed dissertation topic. So, I’m still playing catch-up, and looking for a happy medium for school, career, AND family life. I remind myself, as I learned in pro hockey, ‘it’s only work.’”

Finding his flow at Burning Man

To quote Wikipedia, “Burning Man is an annual gathering that takes place at Black Rock City—a temporary city erected in the Black Rock Desert in Nevada. The event is described as an experiment in community 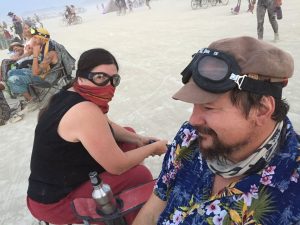 Ted and his wife have attended The Burning Man Festival four times between 2009 and 2013. In the past, they have always attended for the art and Ted would contribute through musical performances. This year, he was invited to present on his interest in flow state and peak performance. “It’s a hot topic and there is a definite interest in that very progressively thinking community of 70,000 attendees.”

Ted led two discussion groups on flow state and peak performance at the “Creation Nation BRC!” theme camp. He was also able to attended a presentation by Stealing Fire coauthor, Jamie Wheal, whose book is about flow state. Even cooler, Ted discovered an interactive sculpture by artists from Mexico City that utilizes measurements of heart rate variability in volunteers to operate the sculpture. Ted was even asked to give a presentation to students of the KIN 712 Sport and Exercise Psychology class, which you access by clicking here: Part 1, Part 2, Part 3

Not all program directors would be ok with their students going missing for a whole week during the first month of class, but director Dr. Brown was all for it. he could have dismissed this festival, but she recognized it as a once-in-a-lifetime professional growth opportunity. And after all, the work would still be there when he returned.

“Being a member of a doctoral program confers a degree of academic legitimacy—that opens doors,” Ted explains. “I respect and appreciate that greatly as I pursue my dissertation and dialogue with other scholars. But perhaps more importantly, the EdD program allows you to pursue practical experiences while remaining in school, and connecting course content to the workplace is not only encouraged, it’s expected.